The Meanings of Amalgam

Description of meanings of Amalgam 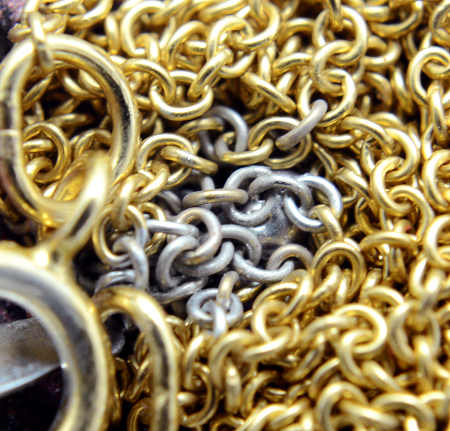 Amalgam is an alloy that includes Mercury (Hg). Amalgam made from Mercury and Gold was used to study alchemy. There are types of Amalgam that are made from Mercury and Silver or Mercury and Copper.
Metals that don't get mixed with Mercury is as follows.
- Iron (Fe)
- Mangan (Mn)
- Cobalt (Co)
- Nickel (Ni)
Almost all other metals can be made into Amalgam.

* You won't become immortal even if you take Cinnabar or Mercury. Mercury is toxic, so please be very careful. You must have prescription from professionals to get an herbal medicine using Cinnabar.

Amalgam that contains Gold has meaning and properties of improving your money luck. Amalgam has been used to extract Gold. Amalgam can make highly valuable Gold, so it is known as a symbol of wealth and success. When you heat Amalgam, Mercury will evaporate. Eventually, Gold that was absorbed will remain. Using this property, a lot of Gold was made.

[How to Refine Gold]
1. Break ores that contain Gold into small pieces
2. Put in Mercury
3. Gold will be absorbed in Mercury
4. Amalgam is made
5. Heat Mercury
6. Mercury will evaporate
7. After evaporation, only Gold will be left
* This procedure is very dangerous. Untrained people should not do this.

Amalgam is basically not sold. But you may make it on your own. If you want to make it powerful, you can make it with Native Gold and Mercury. You can also make it with common gold products and Mercury. When you put Mercury on Gold and leave them for a while, Amalgam will be made. Mercury is toxic metal, so please be very careful if you are doing this. If you spill Mercury on the floor, it will roll away and you will lose sight of it.

Amalgam will be useful as an amulet of Mercury. Mercury is liquid metal, so it is difficult to carry. If you mix Mercury with another metal, it will become solid. Then, you can carry it in an airtight container. Different from liquid Mercury, you can pick it up even if you drop it. It is good for people who think it is difficult to handle but want to have the power of Mercury. There are many sources that say Mercury is a holy item. Amalgam is a good alloy to try the power of Mercury.