The Meanings of Melanite

Description of meanings of Melanite 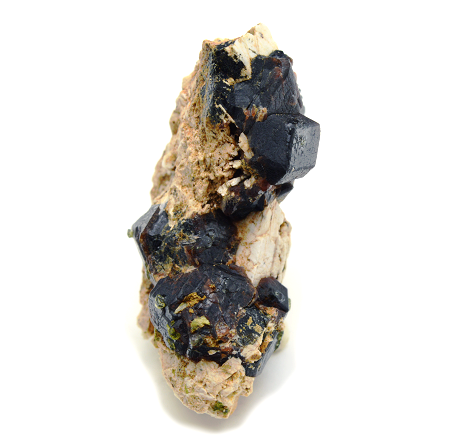 Melanite has the meaning and properties to calm the mind. It is a healing stone to heal a disorderly heart. It helps when calm judgment is necessary. It will let you move on to the best path in a phase you do not want to fail.

Melanite has the meaning and properties to make the best idea flashes. It will help you to grab opportunities for success. It is a gemstone to wipe off the stagnant flow of luck. It changes the negative flow to a positive flow.

Melanite has the meaning and properties to restore lost confidence. It is a gemstone to get out of the chain of self-denial. It makes you look to "good points" rather than your "disadvantages". It will bring out the best power in areas where your strength can be utilized.

Melanite is "Garnet" containing "calcium (Ca)" and "iron (Fe)". The process by which Melanite is produced is as follows.
[1] "Limestone" touches the magma and causes a change.
[2] Boundary between "Limestone" and magma becomes "Skarn".
(Skarn is an aggregate of various minerals.)
[3] Andradite Garnet is born.
[4] The black part is called Melanite.
It is also produced from the rocks called "Serpentine".

The distribution volume of Melanite is small. It will not be sold in most gemstone shops. It is a rare stone for jewelry collectors. If you need it, please find a shop that is strong in "rare stone" or "Garnet". Most is raw stone specimen types and, in rare cases, they are processed into jewelries.

Melanite has the meaning and properties of leading the fight to victory. It is a gemstone to grab good results in the fields of "work", "examination", "game" or "investment" etc. It also gives you the courage to stand up against enemies and difficulties. It is also recommended when you want a reverse flow.