Description of meanings of Sanukite 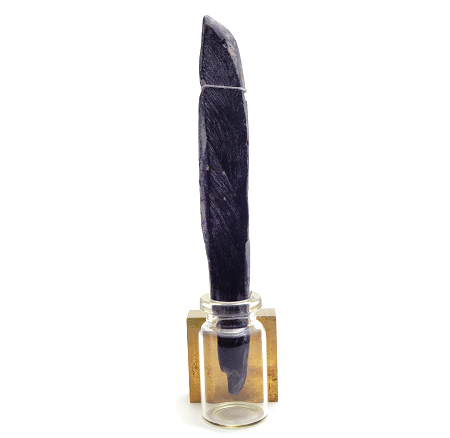 Sanukite has the meaning and properties to activate energy in the body. It is a gemstone to recover the lost energy sufficiently. It is useful when you want to resurrect action power and passion. It is also recommended when you want to keep youthfulness.

Sanukite has the meaning and properties to purify negative energy. It will be useful as an excellent amulet against evils. It is a gemstone to prevent emotions and thoughts from being poisoned. It also prevents your energy from being drained by negative people.

Sanukite has the meaning and properties to make heart open. It is a gemstone to relieve "fear" and "distrust" against people. It gives you the opportunity to get out of the chain of solitude and despair. It is also recommended when you want inner relaxation.

Sanukite is a kind of rock called "Andesite". It becomes glassy Andesite containing "Orthopyroxene". Sometimes it includes "Augite" and "Peridotite". The color of Sanukite is mainly black.

Sanukite is mainly produced from Kagawa prefecture in Japan. Kagawa prefecture was called "Sanuki" a long time ago. The name of Sanukite is derived from "Sanuki". When you strike Sanukite, it has a metallic beautiful sound. In the place of production, instruments using Sanukite are made. The crystals of Sanukite are dense, and when split, the corners become sharp. Using this property, many stone tools were made.

The distribution volume of Sanukite is small. Since its name recognition is not high, it will be a bit hard to find it. Please search for gemstone shops strong in rare stones high and low. The price is cheap and it can be purchased easily. Sanukite is known as a "lithophone" as a stone percussion instrument. It will be sold as instruments in some shops.

Sanukite has the meaning and properties to enhance the charm of the owner. It is a gemstone to maximize the innate brightness. It will stop you from having a bout using the similar charms of yours as those of other people's. It is a charm that attracts strong supporters with your own outrageous charm.

Sanukite has the meaning and properties to increase execution power. It is a gemstone to make you do what you decided once to the end. It will also give "will" and "courage" that can overcome difficulties. It is also recommended when you need strong confidence.