The Meanings of Black Tourmaline Quartz 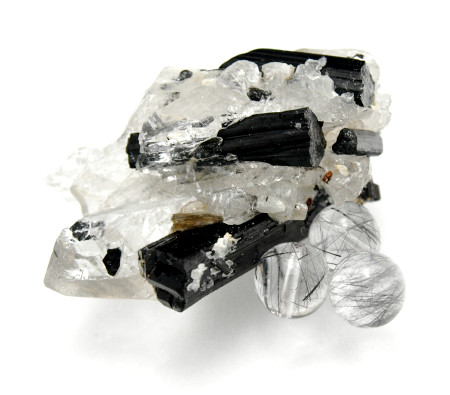 Black Tourmaline Quartz is composed of two kinds of gemstones. It is a good-value gemstone because you can get meanings and effects from both kinds. This gemstone is a mixture of Tourmaline and Quartz. Both of them are very popular and also powerful gemstones. You would be able to get wonderful energy and luck from its synergistic effect.

Black Tourmaline Quartz has a meaning and properties of an amulet. It can protect the owner from negative energy such as anxiety or fear. This gemstone is useful when you have to travel a lot or meet with people a lot. Tourmaline is also known for the power to protect people from harmful energy generated by home electric appliances. It would be a good amulet for people who work in IT industry or home appliance manufacturer. When you want to protect yourself from slanders on the Internet or when you have to work on Internet security, it is also recommended to have one.

Black Tourmaline Quartz is a gemstone that can make human relationship smooth. You would be able to draw in good relationship like an electromagnet. Black Tourmaline Quartz has a meaning and properties of getting a chance of good match. Since it has an amulet effect, it can block negative connections. Its powerful filter can choose a good person that fits you. It would bring you warm affection and the best partner for you.

Black Tourmaline Quartz could be sold in the name of Black Rutile Quartz. But you have to be careful because there are two types of Black Rutile Quartz. One is Quartz mixed with Black Tourmaline and another one is Quartz mixed with black titanium dioxide. The price, the meanings and the effects will be different, so please check them carefully before you buy.